It’s not easy to get to the Outer Hebrides. They are surrounded by beautiful but treacherous, crystal-clear cold seas and are a long way away from the Scottish mainland: Lochboisdale on South Uist is over four hours sailing time from Oban and Stornoway on Lewis is almost three hours from Ullapool.

sound of the announcements in English and Gaelic, the throb of the engine, car motors, the strain of ropes and the clang and scrape of the heavy metal ramp on the port as well as the greetings and farewells of passengers along with the culinary joys of a macaroni cheese pie are familiar to any traveller to the islands.

Since 1942 a programme of causeway and bridge construction has improved connections between islands and has helped, in some cases, to slow or reverse population decline. John 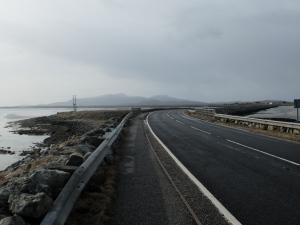 and Mary Maclean talking about the ‘new’ causeway between North Uist and their home island of Berneray (a small island of about 130 inhabitants in the Sound of Harris) which was opened in 1999 tell me “it’s opened the place out completely” making everything easier but they also point out that it has also changed the island forever – as a result of the causeway the school on Berneray has shut down depriving the islanders of the regular sounds of children’s playtime.

Prior to the 1940s travel between the Uists and Benbecula was by horse-drawn cart at low tide accompanied by an expert guide giving rise to the Gaelic saying FAOTHAIL MHATH DHUIBH (A good ford to you). Islanders were reliant on puffers – small flat bottomed cargo ships to deliver essential supplies and take goods off the islands for exports.

You can fly to Barra, Benbecula or Stornoway but where’s the fun in that?